I really didn't care for coffee until my 20s. I can't recall whether or not I had had any prior to that, but I now realize that I didn't really have any after that either; It was mostly just milk and sugar. In fact, it wasn't until I was in my 30s that I enjoyed a cup of black coffee.

I love the taste of coffee, which is why I drown each and every cup with milk and sugar.

My real coffee journey started with the realization that I was spending way too much money at coffee shops. While Idaho has a (surprisingly) large number of drive-thru coffee stands, even the cheapest (Dutch Bros) is still $5 for a basic flavored-coffee. The desire to cut my spending + the discovery of “nitro cold brew” led me to an article on Reddit outlining methods for making cold brew at home.

The idea of cold brew, in particular, was appealing to me because it meant I could make large batches of coffee overnight. I began buying beans on Amazon, grinding them (in what I now know to have effectively been a food processor), and brewing in ½ gallon Mason jars. 24-hours later I could pour myself cup after cup until I ran out and would start the process anew.

One of the benefits of cold brew is the fact that the cold extraction process makes it less acidic and also less prone to the “coffee mouth” that comes after drinking a cup. The issue I quickly ran into, however, was that I found was that while it wasn't as bitter, it didn't really have much flavor by itself. There were some batches that were particularly good, but the majority were “meh” and I would end up adding creamer to compensate. Back to the drawing board.

I started experimenting with different brew parameters, including adjusting the brew time, grind settings, bean roast levels, and temperatures. I also started investing in more and better equipment. The biggest change came with switching from a blade “grinder” to a conical burr grinder (I'm pretty sure it's also free-range, and organic). A blade grinder is basIcally a mini-food processor and chops at the beans until you tell it to stop. Because the beans never leave the container, the grind is rarely (if ever) consistent. Switching to a pass-through, conical burr grinder made the grinds much more consistent.

It was also around this time that I began experimenting with pour-over. Pour-over, as one might imagine, involves pouring hot water over the grounds and is basically what any automatic brewer does (albeit in a much more controlled manner). Without getting into too much detail, the process involves pre-warming/wetting a filter in the dripper and then pouring the hot water over the grounds which percolates into a waiting mug or carafe.

The first dripper I bought was a variation of this one and it was... not good. The main issues I encountered with it were:

After struggling with the basic plastic one, I moved on to a glass dripper (Kalita Wave) shortly thereafter. While it was much better, It required a much courser grind setting due to how slowly the water dripped. 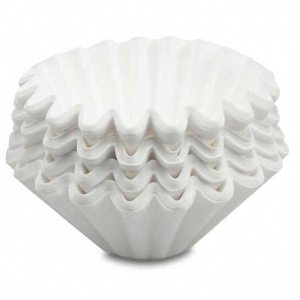 In addition, due to it's flat bottom, the filters it uses are basket-style and can cause grounds to “stick” in the folds. This meant I had to fish them out with a spoon during the brew. Bad news.

Still Not A Pro

This leads me to where I am today: I brew with a Hario V60, a very popular dripper. It brews quickly, has conical filters, and works with a wide variety of accessories. I also use the Barista) iOS app to time my brews. I now really enjoy my morning (and mid-morning, and afternoon, and...) cup of coffee and I drink it black. I still occasionally opt for creamer, but it's a pretty rare event.

Here are some resources I recommend: